How is the Battery Fighter ® battery charger different from a trickle charger?

Although they often appear to be a better economic choice for the typical consumer, trickle chargers do not have the advantag e of sophisticated electronic control. Therefore, as they allow the value of charge cu rrent to trickle down to what appears to be safe levels, the output voltage of the char ger rises well above 15 VDC, sometimes even going higher that 16 VDC depending on the ch arger type and the battery that is connected to it. Either voltage is well above the gassi ng voltage of a lead acid battery. If the battery remains connected to th is high level of voltage for an extended period of time, even less than 1 day, extreme damage can be do ne to the battery. What appears to be a cost savings for the charger may actually cost several times the charger price in replacement batteries.

Many automatic battery chargers turn off wh en the battery voltage rises or the charge current falls to a preset level. Then afte r a period of time, when the battery self discharge characteristics have reduced its terminal voltage significantly, sometimes to the point where the battery has given up almost 90% of its stored charge, the charger will turn on and recharge the battery . This type of cycling will dramatically reduce battery life.

The Battery Fighter ® battery charger does not turn of f. It automatically switches to a safe float voltage level that keeps the battery charged and yet does not do any harm to the battery or cause any reduction in its useful life.

Qualification check to ensures safety by verifying battery st atus prior to charging. Now you will know if batteries need replacing without guessing.

Holds voltage at 14.4VDC and forces curre nt to fully charge the battery. When battery-charging current drops below 0.1 Amp or until 6 to 8 hours have elapsed, will transit to Step 4, Float Charge.

Maintain fully charged battery at 13.2VDC float voltage. If an external load is applied to the battery while the charger is in Step 4, Float Charge, and if th e battery voltage drops below a range between 12.0 to 12.5 VDC, then the charge cycle will restarts. 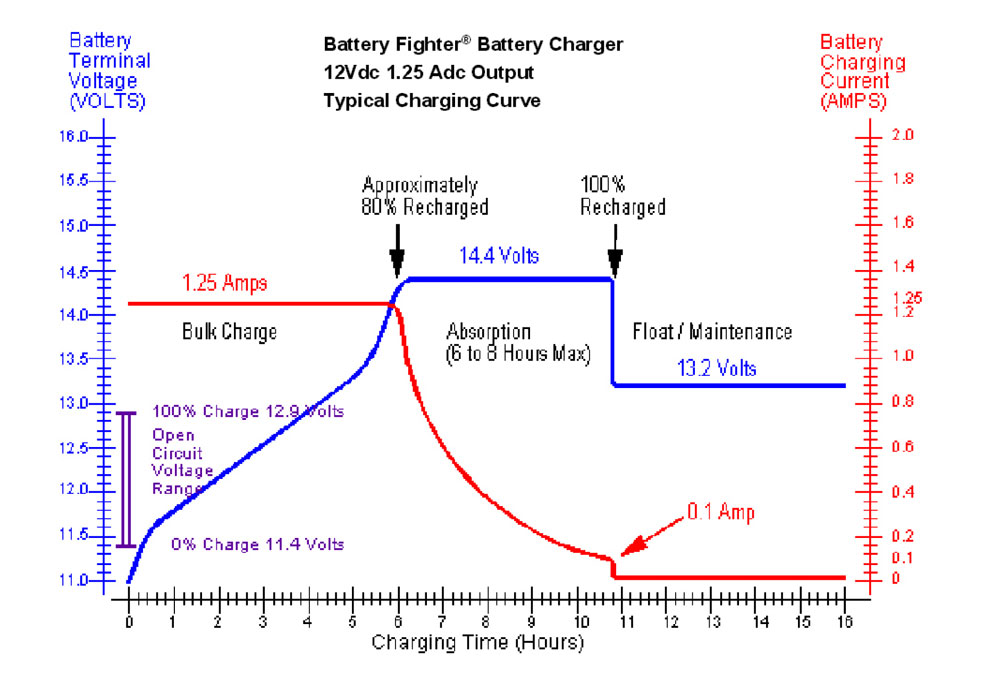